In what was probably one of the most difficult media interviews Dr. Anthony Fauci has faced during his entire tenure as President Biden’s top COVID media personality, CNBC’s Sarah Eisen – who revealed at the very beginning that she had tested positive for COVID despite being fully vaccinated (which is why she was calling in from home – laid into the senior White House advisor and NIH chief about the lack of data or disclosures about “breakthrough” infections, and the risks of vaccinated patients spreading the virus to the unvaccinated.

The interview clarified one point Dr. Fauci had been trying so desperately to conceal: that the incidence of breakthrough infections is much higher than the CDC and the government have claimed, and furthermore, Dr. Fauci even hinted that there might be some new “data” coming offering a more realistic analysis of how effective the vaccines truly are.

The interview started with a standard question about the major story of the day, Merck’s new early-intervention treatment for COVID, which, despite its universal acclaim, is facing some questions about safety standards from sceptics.

Breaking news! Merck issues press release telling us how awesome their new drug molnupiravir is. Which the WSJ dutifully publishes as a news item. As a health policy professional researching propagandizing techniques, I thought I'd share some observations: https://t.co/a0342kpfmS

Dr. Fauci said that the FDA would review the data and approve the drug as quickly as it can.

“When you have an orally administered medical intervention that attacks the virus…and has this kind of data….the trial was designed to be given early during the course of infection, it’s an early administration drug that’s very important.”

The good doctor insisted he couldn’t commit to a timeline for approval, then claimed that the treatment. Would likely be available to both vaccinated and non-vaxxed alike.

“As for when it will get approved by the FDA, “the company says it will be imminently be sending the data to the FDA, so you need to give the FDA the time to go over the data…I can’t get ahead of them, I can’t tell you what it will be, but without giving a timeline, know that they are working very hard to get it done.”

“This is a treatment for infection, so whether you get infected following vaccination or without one…I would assume if you’re infected you’re infected, it doesn’t really matter whether you’re vaccinated or not…but let’s leave that for the regulatory authorities…”

“In my opinion as a public health professional, it’s always better to not get infected than to get infected and rely on a drug to prevent you from getting advanced disease. No drug by any means is 100% effective. Looking at the study, it’s a quite good result, with 50% protection. A 50% increase remember, there were people on the treatment arm who didn’t have a successful result. The best way to not get infected is to get vaccinated.”

Finally, Eisen Hit Dr. Fauci with a surprise hard ball: She cited “data” collected within her own family, whereby three vaccinated people got COVID and immediately passed it on to two unvaccinated children.

Eisen then suggested that the CDC might be “too casual” about breakthrough infections, and also questioned “How can the CDC keep saying COVID “breakthrough” infections are rare if they have no data?”

To this, Dr. Fauci replied that the CDC is scrambling to change this, and even hinted that more data on the true rate of breakthrough infections would likely soon arrive.

“Three vaccinated people got COVID in my house two unvaccinated children got it…are you too casual about the limitations of the vaccine? It seems to me these breakthroughs are happening and they’re happening regularly. You can get it and transmit it and the government hasn’t been warning about that,” Eisen said.

“Oh yes we have and let me get you the facts. If you are an unvaccinated person you have 11x the likelihood of hospitalization...if you look at the people who have died from COVID-19, overwhelmingly they have been unvaccinated,” Dr Fauci

Fauci adds that “over 90%” who have been unvaccinated – but of course that vast majority of deaths occurred before the vaccine rollout even started, making this statement slightly misleading. 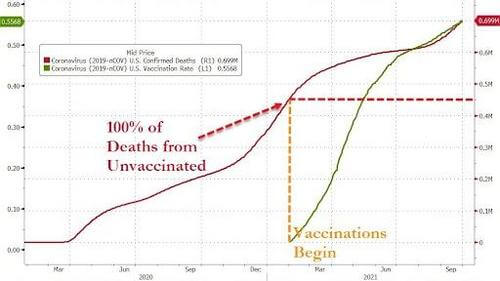 As for determining how many unvaccinated have died since the program began, it’s not exactly clear since this data wasn’t being tracked. Though deaths and hospitalizations have fallen since vaccination rates have risen, but there’s still many questions about whether the young and health actually benefit.

"If you look at the people who have died from COVID-19, overwhelmingly 90% of them are unvaccinated," says Dr. Fauci. "If you get vaccinated and get a break through infection, you are much less likely of having a severe outcome and much more likely you would be without symptoms." pic.twitter.com/gEFsIjTNWj

Dr. Fauci had nothing really to say to this except to admit she was of course correct while offering a flimsy excuse about the CDC working on it.

“Well in the past the CDC has not tracked real or asymptomatic infections, but there are studies being done that would give the kind of data you’re talking about.”

“And with the booster program we’re rolling out, we hope to see an improved effect. Israeli data have shown that when you give an at risk person a booster shot, they’re chances of being hospitalizations drop.”

The interview with a question from CNBC host Wilfred Frost about the risks of any future variants, to which Dr. Fauci responded with the typical fear-mongering.

“I’ll give an answer that’s totally consistent with what I’ve said before, is the likelihood of seeing something worse…is completely in our own control…if we allow the virus to freely circulate, particularly among unvaccinated people, you give the virus a greater possibility of producing a variant that could create some trouble for our vaccines.”

But overall, the interview makes clear: the media is starting to get curious about the growing reports of breakthrough infections of public officials like Brett Kavanaugh (whose diagnosis was announced today) to family members and friends.

Whatever it is, the 90% + rate they insist on seems increasingly like a stretch.

Clips of the grilling have started to surface on Twitter, but CNBC has yet to release a clip.

This article (Watch: Dr. Fauci Confronted About CDC’s Unverified Claims About “Breakthrough” Infections) was originally published on Zero Hedge and is published under a Creative Commons license.