A motion-activated tracking camera has captured what appears to be a small humanoid creature peering out of the darkness. 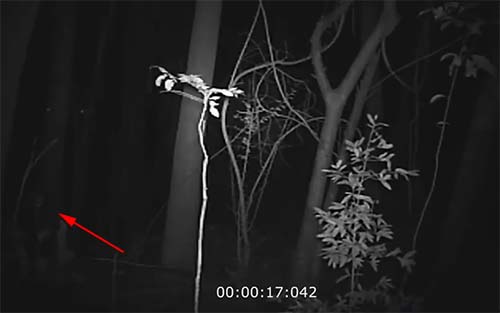 Horror images. YouTube Internet users were stunned to see the video that a channel broadcast about a strange humanoid creature in the forest. The recording has been viewed by thousands of users.

The footage, which was recorded on October 21 near Sydney, Australia, by an outdoor wildlife camera with night vision, shows something unusual in the lower left corner.

A small, humanoid-looking creature that peers out from the foliage with its two large almond-shaped eyes glowing in the dark as its head moves from side to side.

This movement seems to have been responsible for activating the camera’s motion sensor.

Of course, given the low resolution and darkness, it’s very hard to make out exactly what the creature is; there are chances that it is simply an animal, such as an opossum, that has been illuminated in such a way as to give it the appearance of a small humanoid.

As there is also the possibility that it is a grey alien exploring the area…?

Some suggest that it would be a bush that has a humanoid shape that was confused. Other users affirm that it could also be a video montage.

You can watch the full footage below and draw your own conclusions.

Top 4 Insane Alien Encounters | The Proof Is Out There