In the paranormal realm, Bob Lazar has sparked a lot of debate and discussion. According to Lazar’s claims, he worked with alien technology in a top-secret location known as S4 (Sector Four), which is adjacent to the famed restricted military site Area 51 in Nevada, reverse-engineering UFOs.

Lazar claims to be a qualified engineer and scientist, having earned a Masters in Physics from MIT and a Masters in Electronics from the California Institute of Technology, among other credentials. Both of these claims were debunked in 1993 when a Los Angeles Times inquiry discovered that none of the universities had any record of his supposed academic accomplishments.

Stanton Friedman, a well-known physicist, UFOlogist, and investigator, also looked into Lazar’s academic history but came up empty-handed after many searches for transcripts, degrees, professional affiliations, and even pages in Caltech or MIT yearbooks.

Friedman could only confirm one component of Lazar’s education: Lazar did attend some electronics classes at Pierce Junior College (in Los Angeles) in the late 1970s.

Several of Lazar’s supporters argue that the government “wiped” or destroyed his academic record in an attempt to undermine his credibility after he came forth with information concerning top-secret projects he purportedly worked on while at S4.

His educational and professional past is still a source of great speculation, and no solid verifications have been made public, feeding Lazar’s supporters’ claims that the authorities tampered with his personal documents. 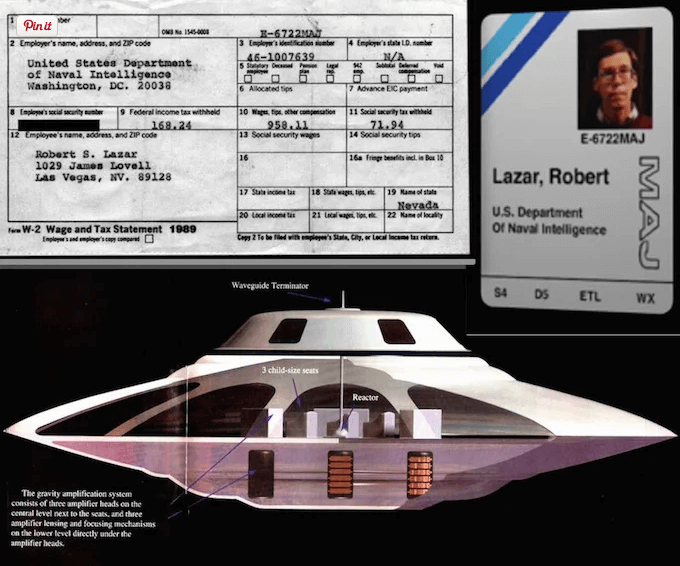 W-2 paperwork and pay stubs for Lazar have also surfaced, purporting to indicate that he worked for the US government in 1989, although many critics think the documents are frauds.

Another point addressed in connection with Lazar’s employment history is why he only worked for the government for six months and why such high-level secret research had to be delegated to an outside contractor.

The issue of Element 115, which Lazar claimed to have dealt with first-hand while performing his study, is one of the most intriguing components of Lazar’s account. Element 115, dubbed “Ununpentium” at the time of its discovery, is a superheavy synthetic chemical element that was found in 2003.

Element 115, according to Lazar, was employed as a nuclear fuel source to power and accelerate the alien spaceship he studied. He further stated that the proton bombardment of Element 115 would cause anti-gravity effects as well as antimatter-based energy generation, allowing the spaceship to not only propel itself but also sustain its fuel requirements at the same time.

Lazar also stated in a critical 1989 television interview with investigative reporter George Knapp that the US government had 500 pounds of Element 115, and that he was able to obtain a tiny amount of it for himself at one point, but that it was eventually taken again.

The difficulty with this claim is that the phone book also claims to have contact information for DOE workers as well as an outside contractor named Kirk Meyer. Lazar’s name is mentioned in the phone directory, but it is preceded by a “K/M” designation, suggesting that he worked for Kirk Meyer rather than the Los Alamos National Lab.

Lazar claims to have been briefed about the centuries-long involvement of alien beings with our planet during his claimed time at S4. In later testimonials, he claimed that these extraterrestrials came from a binary star system known as Zeta Reticuli, a renowned portion of the Southern Hemisphere constellation Reticulum.

Many UFOlogists and other paranormal researchers believe Zeta Reticuli is the home world of the Zeta Reticulans, sometimes known as the “greys” because of the consistent descriptions given by reported alien abduction victims and other eyewitness testimony.

Unfortunately, Lazar has been embroiled in legal challenges in recent years over other business enterprises he pursued following his purported job at S4. After installing a computer system at a brothel in Clark County, Nevada in exchange for what we’ll term “business services,” he was arrested and charged with pandering.

Despite the fact that prostitution is allowed in Nevada, it is prohibited in Clark County. Bob was then sentenced to three years of probation and community work, which included, ironically, the installation of a computer system for the Clark County administration.

Lazar later founded United Nuclear, a scientific supply firm that began in New Mexico but currently operates out of Laingsburg, Michigan, in the year 2000. High-powered magnets, diverse lab chemicals, and radioactive ores are among the scientific goods sold by United Nuclear.

After it was revealed that Lazar and his wife were moving banned items over state lines, a violation of the Federal Hazardous Substances Act, United Nuclear became the focus of a federal inquiry. Because he obtained false information from the Internet, Lazar claimed he was ignorant that the items were prohibited.

Lazar has kept a quiet profile in recent years, despite becoming something of a cult figure for his contributions to the UFO/paranormal field. He is now organizing the “Desert Bl ast” yearly event, which is known as the world’s largest “outlaw” fireworks spectacular.

Surprisingly, the event has taken on the same secrecy as Lazar himself, as the festival’s date and venue vary every year and are only revealed to those who are invited.

Despite the fact that many individuals have contested and/or discredited Lazar’s claims concerning S4 and Element 115, there is still a stigma attached to them. We may never know the whole truth behind these issues, but they certainly add to the mystery surrounding the US government’s ongoing concealment of alien life.