One of the most convincing UFO sightings occurred at Richmond School in Napier, New Zealand. Along with the school principal and teachers, 400 students saw a giant object in the sky. This event was mentioned in the Napier Daily Telegraph on May 8, 1970 just one day after the sighting of the huge UFO, with this headline: “Mystery sky object seen by teachers and 400 children.”

The article transcription says: “A huge unidentified flying object which appeared as a “hole in the sky” as it hovered near Napier was watched for up to 20 minutes by the headmaster, teachers and more than 400 children at Richmond School, Maraenui, yesterday afternoon.”

“Witnesses to the sighting said there was an “unearthly quiet” as the usually noisy children stopped their play and watched awed and fascinated by the saucer-shaped object.” The headmaster, Mr. W. Billing, said he was watching the children playing in the school grounds when he noticed the object moving in from the south. “I thought it was an aircraft at first,” he said. “Then I realized it had stopped moving and it appeared as an extremely brilliant object in the clear sky.”

As he drew his teachers’ attention to it, the children also spotted the object and stopped their play. “It was like a huge, wingless plane with the sun glistening on it. But what amazed us was that it was also glistening on the side away from the sun,” he noted. The object seemed to be hovering in an area between Westshore and Tongoio. “We were watching it when a plane came into view and landed. There was definitely no comparison between the object and the aircraft,” he explained. 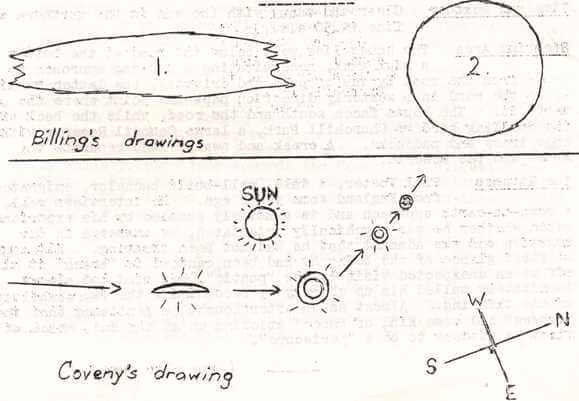 After hovering for three or four minutes, the object began to move away. “It then moved at ring-angles, and the next thing we knew it was like a round ball with the middle a transparent-like sheen.” “It then flattened out again and continued to move away in a straight lune to become like a bright star.” “All of a sudden it seems to light up again, like an extremely brilliant planet, and then fade again before it moved away at speed,” Mr. Billing said. The object was last sighted at about 2:23 pm.

“It wasn’t a weather balloon, which you wouldn’t see change from a round to an oval shape,” Mr. Billing claimed. “It was also definitely a solid object, and you seemed to get the feeling it was metallic.” One of the teachers, Mr. A. Coveny said he had read reports of people sighting unidentified objects but he had always been “rather sceptical” until that day. “We thought half of Napier would have seen it,” he said. “Here at the school, everyone was standing with their mouths open trying to work out a logical answer to it.” A pupil had come to him for an answer. “He asked me if it was a flying saucer and I said “yes” because I couldn’t give any other answer,” Mr. Coveny said.

“The sighting had stopped the usual sounds of noisy play.” “The whole area seemed to be so unnaturally quiet that it was uncanny,” he noted. It was not only the movements of the “flying saucer” which were unearthly but also the appearance of the craft when it changed shape. “There was an iridescence from it, and it looked as though it was an actual hole in the sky – just as if you were looking through it into another dimension,” the teacher said.

Other than the Napier sighting, there are mass UFO sightings that happened prior to it. For example: On September 20, 1956, Southwell School [Claudelands] boys and masters saw a brilliant white object, slightly larger than the moon.

Here is Mr. Parry’s (one of the masters) personal report, made to the Hamilton UFO Research Society:

“The object was approximately due north about 50° elevation at, I should judge, 3,000 to 4,000 ft. altitude. It was brilliant white in colour. I cannot recall having seen such a dazzling pure whiteness. The object remained in a stationary position for at least a minute; it then moved away at remarkable speed to the north, rapidly becoming smaller until it was lost to sight. It took 10 seconds to disappear.

There were no clouds in the area of the sky in which the object was observed. No markings, motions, spinning, etc. could be seen. It simply appeared as a perfect disc. It was observed by two other masters and some 50 boys.” (Source: CSINZ Whenuapai, Flying Saucers, Vol.4, Iss.3, Jan-Mar. 1957)

Then on December 20, 1968, a group of children at Te Mata School, Havelock North, New Zealand reportedly saw a flying saucer at close range in the morning, and it frightened them. (Hawkes Bay Herald Tribune, Dec 20, 1968)

The description of the object, by half a dozen children who saw it hovering above an orchard near the school at 11.20 AM, varied in detail, but all of them agreed on its size and shape, and everyone said they were “scared.”

They said they could see a hatch and antenna as the saucer-shaped object hovered at a low level over some poplar trees. They reported that the object made a clicking noise and was about half the size of the school’s swimming pool. The children were in a non-swimming group and drew the attention of their teacher – who was giving swimming lessons to other members of the class – to the object as it suddenly “shot upward” and travelled [northwards] towards Hastings, leaving a vapour trail.

The teacher said he watched the object for about 10 minutes as it travelled backward and forward across the city of Hastings. At times, the teacher thought it could be an airplane, but at other times, it appeared to be too round to fit the description of any aircraft he knew.

The parents of 32 pupils of Te Mata School, Havelock North no longer joke about flying saucers: all of their children say they saw one of those “outer space” objects floating above their playground on Friday morning. (Wellington Sunday News, Dec. 22, 1968)

The mass sighting of the giant New Zealand UFO joins a list of other sightings with a large number of witnesses. Perhaps the most remembered, being one of the most recent cases, was the sighting that happened at the famous Ariel School in Zimbabwe, in 1994. On that occasion, the children not only saw the flying object, but it also landed and its crew members showed themselves.

READ MORE: Why The Polish UFO Encounter Is the Most Credible One Yet