Almost everyone loves a nice, hot meal. Casseroles, stir fries, soups, stews, you name it… if it’s steaming, hearty, and brimming with tasty ingredients, most people will choose it over a plate of bland, cold veggies the majority of the time. But what many people don’t know is that the cooking process (as good as it makes many foods taste) changes the composition and structure of raw food. In fact, it can kill off a key nutritional element that our bodies need for proper digestion and assimilation: enzymes.

Though they don’t get nearly the attention they deserve, enzymes are the energetic stimuli that convert food nutrients into fuel that our bodies can actually use. They’re naturally present in rich supply in raw foods straight from nature.

On the other hand, foods that are cooked, pasteurized, and/or processed contain few or no enzymes. And yet these are the types of foods that many people rely on for daily sustenance, unaware of the fact that they are aren’t getting the nutrition they think they’re getting due to enzyme deficiency.

These “dead” foods are devoid of enzymes and place a heavy burden on our bodies’ own enzymatic reserves which have to be tapped in order for dead foods to be digested and passed through the system. Our bodies are programmed to correct this deficiency by working extra hard to redirect their inherent enzyme stores. But they can only do so for a time until finally reaching a point where they, like processed foods, end up depleted of enzymes.

It’s right around this time when enzymatic failure begins to rear its ugly head? Manifesting as indigestion, constipation, and eventually much worse… chronic disease and death.

Raw Food Enzymes: Eating for Life Rather than Death

If this is the first time you’re hearing about enzymes, you’re certainly not alone. Despite the fact that they’re among the most important dietary co-factors for staying nourished, enzymes are usually one of the last things people think about when they eat. That’s because public health officials and others dispensing dietary advice in the mainstream rarely mention enzymes? Probably because they themselves don’t even know what enzymes are and why they’re critically important for good health.

Either that, or they don’t want to admit publicly that the conventional ways of processing, packaging, and serving food destroys its enzyme content. Perhaps if more people knew the truth about this, it would drive them to make different food choices.

While it won’t do the big food conglomerates any favours, the truth of the matter is that enzymes are absolutely critical for life. Eating food raw, or as close to raw as possible, helps ensure that its nutrients are fully bioavailable for maximum health.

These are a number of enzymes necessary for the foods you eat to be digested and used by the body. These include:

At What Temperature Do Enzymes Die?

You should know that any food that’s been heated beyond 118 degrees Fahrenheit has already undergone some level of enzymatic breakdown. If you think about it, most convenience foods, fast foods, and processed foods are cooked at temperatures well beyond this. Even traditional cooking methods render food that, enzymatically speaking, is as good as dead.

Now, this isn’t to say that your body can’t still derive nutrients from dead food. It can through its own input of digestive and metabolic enzymes. But this isn’t an ideal or sustainable situation, as the body’s own enzyme reserves are limited and can also become depleted with excessive use.

Eating raw foods, or what I like to call “eating for life,” means that your body won’t have to deplete its enzymes stores because raw food has its own enzymes. Raw food constitutes the full package your body needs to ensure that nutrients get to wherever they need to go without overtaxing it. Eating processed and overcooked foods, on the other hand, or what you might call “eating for death,” forces the body to have to compensate for enzyme deficiency by substituting its own enzymes.

Simply put, food is supposed to give life to our bodies with ease. But it can’t do this effectively when the foods we eat are lacking in enzymes, forcing the body to supplement this deficiency with its own metabolic enzymes.

This diversion of the body’s metabolic enzymes to fill the enzyme gap creates a situation where the body loses some (or in a worst-case scenario, all) of its ability to supply enzymes for energy production and cell regeneration and detoxification, leading to all sorts of health problems.

This is obviously a situation you want to avoid, which is why it’s important to make sure that you’re getting enough enzymes in your everyday diet. One obvious way to do this is to simply eat more raw foods, and especially raw juices freshly-pressed from vegetables and fruit. The reason why juicing is particularly beneficial as far as enzymes are concerned is that it concentrates not only nutrients but also enzymes from fresh produce into an easy-to-drink juice that you can take on the go.

Tip for getting maximum nutrition from fresh juices: Use organic produce, consume as soon as possible after juicing, and store any leftovers in glass containers instead of plastic.

Another way to ensure that you’re getting enough enzymes so as not to overburden your body’s enzyme stores is to supplement with a food-based enzyme formula. By taking a full-spectrum enzyme supplement with every meal? And especially those that involve a lot of cooked and processed food items? You’ll help ensure that your body is fully able to use its own enzyme stores for bodily maintenance and repair, rather than to digest enzyme-deficient food.

One of the great things about supplemental enzymes is that whatever enzyme surplus your body ends up with beyond what’s necessary to digest enzyme-deficient foods can be used by the body to perform various digestive and metabolic tasks. This assumes, of course, that you’re taking a high-quality enzyme supplement that’s been designed to withstand digestive breakdown and function at a systemic level.

Can Enzymes Increase Your Vitality?

Supplemental enzymes can also support the body with staying strong and youthful. Not in some kind of “miracle wrinkle cream” way that defies logic, but simply because our bodies need enzymes to repair and grow. Aside from the fact that processed and cooked foods are enzyme-deficient, our bodies progressively produce fewer and fewer metabolic enzymes the older we get. This means the more supplemental enzymes we can get, the better the odds for our long-term wellness and vitality.

All the way around, enzymes are a critical component of any healthy diet. And if you’re like the vast majority of people living in the developed world who don’t adhere to a strict, raw food-based diet, then chances are your body is in desperate need of more enzymes.

Truth be told, many of the chronic health conditions that people face today stem from an underlying enzyme deficiency. By simply making sure that you’re getting more than enough enzymes to keep all the systems in your body running smoothly? Including the digestion of your food? You can help your body avoid the pitfalls of having to operate in enzyme overdrive due to a lack of food enzymes. 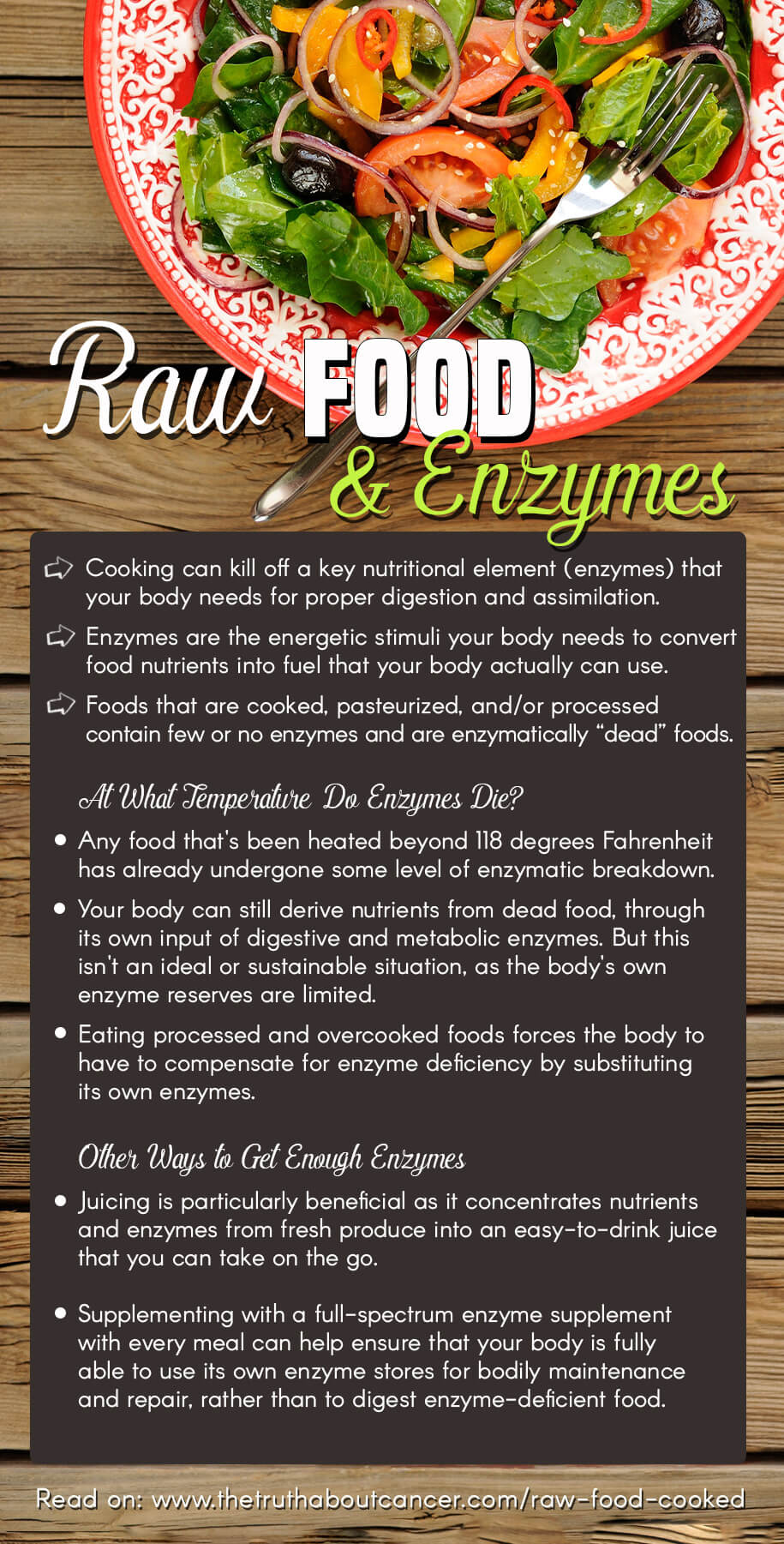