The FBI has issued a statement in response to the Elon Musk’s release of THE TWITTER FILES, which boils down to ‘Of course we’ve embedded ourselves in social media companies, and anyone who has a problem with it is a conspiracy theorist trying to tarnish our stellar reputation.’

“The correspondence between the FBI and Twitter show nothing more than examples of our tradition, longstanding and ongoing federal government and private sector engagements, which involve numerous companies over multiple sectors and industries.

As evidenced in the correspondence, the FBI provides critical information to the private sector in an effort to allow them to protect themselves and their customers.

The men and women of the FBI work every day to protect the American public.

It is unfortunate that conspiracy theorists and others are feeding the American public misinformation with the sole purpose of attempting to discredit the agency.”

Aside from the obvious absurdity of the organization which participated in the Russia hoax and told Martin Luther King Jr. to kill himself suggesting they’ve got a modicum of credibility – did the FBI just assume there are only two genders when there are in fact 58, according to Facebook? Terribly bigoted of them.

The FBI also claims they did not provide Twitter with any “specific instructions or details regarding the Hunter Biden laptop story,” adding “We did not request anything of the sort..”

FBI officials say they did not provide Twitter with any “specific instructions or details regarding the Hunter Biden laptop story.” On allegations that the FBI attempted to suppress or spike the Hunter laptop story: “We did not request anything of the sort..”

Ah – so it was only the ex-FBI guy at Twitter, not the FBI, suggesting it.

34. On Oct 14, shortly after @NYPost publishes its Hunter Biden laptop story, Roth says, “it isn’t clearly violative of our Hacked Materials Policy, nor is it clearly in violation of anything else," but adds, “this feels a lot like a somewhat subtle leak operation.” pic.twitter.com/xMnEWzgxdU

At the end of the day;

2. FBI spent 2020 telling Twitter that a "hack-and-leak" involving Hunter would occur in Oct 2020

3. FBI was spying on Giuliani when he gave laptop to NY Post https://t.co/AtU08zfsYS

Whatever it took, right? 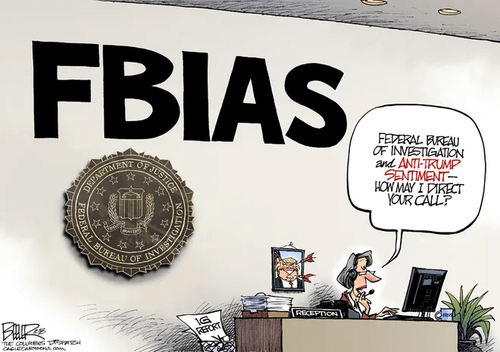 Read more on Elon Musk’s Twitter: Elon Musk Releases THE TWITTER FILES: How Twitter Collaborated With “The Biden Team” To Cover Up The Hunter Laptop Story