Months before the first official reports of a novel coronavirus in Wuhan, China, officials in Hubei Province placed a massive order for PCR tests, according to Nikkei, citing a report from researchers – including former intelligence officers – in the U.S., the U.K. and Australia.

Records from a website aggregating public sector procurement contracts reveal that approximately 67.4 million Yuan (US$10.5 million at current rates) was spent on the Polymerase Chain Reaction (PCR) tests starting in May 2019 – nearly double the 2018 total. 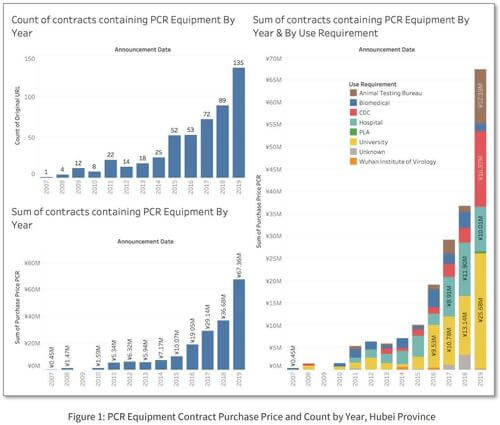 “Monthly procurement data shows a spike in orders in May, especially from CDC buyers and the People’s Liberation Army,“ according to the report.

The report casts further doubt on China’s official line about the origins of the virus, a topic that has fuelled tensions between Beijing and Washington.

PCR, or polymerase chain reaction, tests are used to detect the presence of a particular genetic sequence in a sample, and they have applications beyond COVID-19 testing. But the report alleges the unusual uptick likely signals awareness of a new disease spreading in the Wuhan area.

Orders doubled from universities, jumped fivefold from the Chinese Centre for Disease Control and Prevention and surged tenfold from animal testing bureaus. Purchases from hospitals declined by more than 10%. – Nikkei

“We believe the increased spending in May suggests this as the earliest start date for possible infection,” the report concludes.

Purchases also soared between July and October as well – especially from the Wuhan University of Science and Technology, which spent 8.92 million Yuan in 2019, an eight-fold increase over 2018. 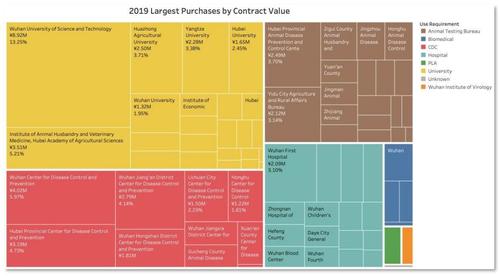 The researchers note that the university, along with local hospitals and public health authorities, are the primary responders to outbreaks of new diseases – and that the involvement of these groups is evidence that “the increase of purchasing was most likely linked to the emergence of COVID-19 in Hubei Province in 2019.”

“We assess with high confidence that the pandemic began much earlier than China informed the [World Health Organization] about COVID-19.”

According to the World Health Organization (WHO), China told them that the first symptomatic case was recorded on Dec. 8, 2019 – however US intelligence and other agencies and researchers have alleged that the virus was circulating much earlier.

“We can’t say for sure with just” the public procurement information, said Akira Igata, a visiting professor at Tama Graduate School of Business in Tokyo who examined that data independently, “but it’s strong information for making the case that there was awareness of a virus outbreak around Wuhan several months to half a year before that December.“

“This report could provide an opportunity for countries to press China for information again,” Igata said. -Nikkei

The new report casts further doubt over China’s official narrative from Beijing, which has been anything but forthcoming about their activities in Wuhan.

“There has been no sharing of usable data from China regarding how and when COVID-19 started,” said David Robinson, an author on the report. “Zero transparency has fuelled a lot of hypothesis, theory, misinformation as well as heartache for the victims.”

This article (China Placed Massive Order For PCR Tests Months Before First Official COVID Case) was originally published on Zero Hedge and is published under a Creative Commons license.