“Your memorandum is a politically-motivated abuse of power and displays a lack of reasoned, sound judgment… confronting parents to oppose the views of the Biden administration and its socialist agenda…”

Related: Covid-19 Detention Camps: Are Government Round-Ups of Resistors In Our Future?

🚨My letter to AG Garland today:

AG Garland is using the DOJ to intimidate and silence parents who are exercising their First Amendment rights. This is an egregious and unprecedented abuse of power. pic.twitter.com/ZSJ9ENjCu6

One day after a North Carolina school board adopted a policy that would discipline or dismiss teachers if they incorporate critical race theory (CRT) into their teaching of the history of the United States, The Epoch Times’ Ivan Pentchoukov reports that Attorney General Merrick Garland on Oct. 4 announced a concentrated effort to target any threats of violence, intimidation, and harassment by parents toward school personnel.

The announcement also comes days after a national association of school boards asked the Biden administration to take “extraordinary measures” to prevent alleged threats against school staff that the association said was coming from parents who oppose mask mandates and the teaching of critical race theory.

Garland directed the FBI and U.S. attorneys in the next 30 days to convene meetings with federal, state, and local leaders within 30 days to “facilitate the discussion of strategies for addressing threats against school administrators, board members, teachers, and staff,” according to a letter (pdf) the attorney general sent on Monday to all U.S. attorneys, the FBI director, the director of the Executive Office of U.S. Attorneys, and the assistant attorney general of the DOJ’s criminal division. 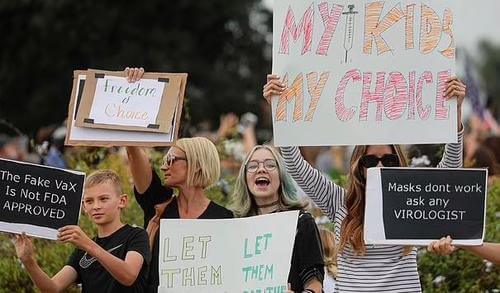 According to the DOJ, further efforts will be rolled out in the coming days, including a task force that will determine how to use federal resources to prosecute offending parents as well as how to advise state entities on prosecutions in cases where no federal law is broken. The Justice Department will also provide training to school staff on how to report threats from parents and preserve evidence to aid in investigation and prosecution.

“In recent months, there has been a disturbing spike in harassment, intimidation, and threats of violence against school administrators, board members, teachers, and staff who participate in the vital work of running our nation’s public schools,” Garland wrote.

“While spirited debate about policy matters is protected under our Constitution, that protection does not extend to threats of violence or efforts to intimidate individuals based on their views.”

School boards across the nation have increasingly become an arena for heated debate over culture, politics, and health. Parents groups have ramped up pressure on boards over the teaching of critical race theory and the imposition of mask mandates. The debate is split sharply along political lines, with Democrats largely in favour of critical race theory and mask mandates, and Republicans opposing both.

The amount and severity of the threats against officials are not known, but Garland’s letter suggests the phenomenon is widespread.

In recent months, there has been a disturbing spike in harassment, intimidation, and threats of violence against school administrators, board members, teachers, and staff who participate in the vital work of running our nation’s public schools. While spirited debate about policy matters is protected under our Constitution, that protection does not extend to threats of violence or efforts to intimidate individuals based on their views.

[ZH: But intimidating parents who dare to have the view that the nation’s founding fathers and the founding documents are not in fact systemically racist and does not want their children taught that is the case is ok?]

Threats against public servants are not only illegal, they run counter to our nation’s core values. Those who dedicate their time and energy to ensuring that our children receive a proper education in a safe environment deserve to be able to do their work without fear for their safety.

[ZH: “Dedication” to a “proper education” is admirable; indoctrination in Marxism is not]

The Department takes these incidents seriously and is committed to using its authority and resources to discourage these threats, identify them when they occur, and prosecute them when appropriate. In the coming days, the Department will announce a series of measures designed to address the rise in criminal conduct directed toward school personnel.

[ZH: What exactly is the crime?]

Coordination and partnership with local law enforcement is critical to implementing these measures for the benefit of our nation’s nearly 14,000 public school districts. To this end, I am  directing the Federal Bureau of Investigation, working with each United States Attorney, to convene meetings with federal, state, local, Tribal, and territorial leaders in each federal judicial district within 30 days of the issuance of this memorandum. These meetings will facilitate the discussion of strategies for addressing threats against school administrators, board members, teachers, and staff, and will open dedicated lines of communication for threat reporting, assessment, and response.

[ZH: We wonder how many local law enforcement officials, while busily watching for vaccine passport offenders, and mask-mandate refusers, will acquiesce to enforcing these new laws to protect the very people who are preaching that America’s systemic racism starts with the men (and women) in blue?]

The Department is steadfast in its commitment to protect all people in the United States from violence, threats of violence, and other forms of intimidation and harassment.

[ZH: Presumably intimidation and emotional harassment of young white boys and girls for their ‘whiteness’, privilege, and systemic racism is beyond that ‘protection’?]

They want to reclassify dissent as "disinformation" and "domestic terrorism," justifying an unprecedented intervention, both directly and in partnership with tech companies.

Rufo goes on to note that:

“Neither the Attorney General’s memo nor the full Justice Department press release cites any significant, credible threat. This is a blatant suppression tactic, designed to dissuade citizens from participating in the democratic process at school boards.“ 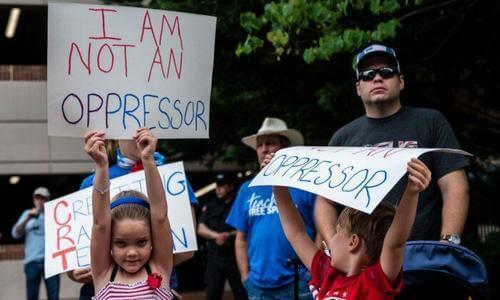 Parents have led the charge against controversial issues such as Critical Race Theory (CRT), masking mandates and vaccine requirements.

CRT holds that America is fundamentally racist, yet it teaches people to view every social interaction and person in terms of race. Its adherents pursue “antiracism” through the end of merit, objective truth and the adoption of race-based policies.

This is Courtney Ann Taylor, a mother in Georgia. She’s one of the many parents who’ve HAD IT with mask mandates, especially for young kids in school.

In Loudoun County, Virginia, two parents were arrested in June for trespassing while protesting CRT and a transgender policy at the school district because they refused to leave the rowdy meeting that was declared an unlawful assembly.

In July, a man was arrested at a school board meeting and charged with a felony because a gun reportedly fell out of his pocket, the Indianapolis Star reported.

“Parents are speaking out against Critical Race Theory in schools. Now the Biden administration is cracking down on dissent.” 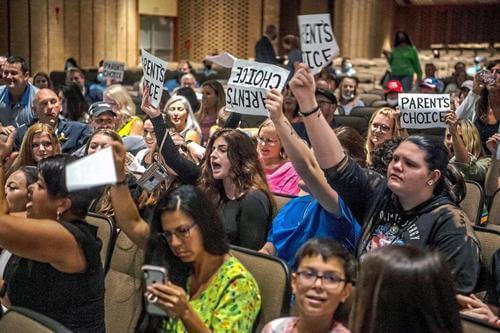 Just this week, Ron Paul explained why it is so important for parents to control the education of their children:

During last week’s Virginia gubernatorial debate, Democratic candidate Terry McAuliffe promised that as governor he would prevent parents from removing sexually explicit books from school libraries, because he doesn’t think “parents should be telling schools what they should teach.”

McAuliffe’s disdain for parents who think they should have some say in their children’s education is shared by most “progressives,” as well as some who call themselves conservatives. They think parents should obediently pay the taxes to fund the government schools and never question any aspect of the government school program.

School officials’ refusal to obey the wishes of parents extends to the anti-science mask mandates. Mask mandates are not only useless in protecting children from a virus they are at low risk of becoming sick from or transmitting, the mandated mask-wearing actually makes children sick! Yet school administrators refuse to follow the science if that means listening to parents instead of the so-called experts.

Replacing parental control with government control of education (and other aspects of child raising) has been a goal of authoritarians since Plato. After all, it is much easier to ensure obedience if someone has been raised to think of the government as the source of all wisdom and truth, as well as the provider of all of life’s necessities.

In contrast to an authoritarian society, a free society recognizes that parents have both the responsibility and the right to provide their children with a quality education that reflects the parents’ values. Teachers who use their positions to indoctrinate children in beliefs that contradict the views of the parents are the ones overstepping their bounds.

Restoring parental control of education should be a priority for all who believe in liberty. If government can override the wishes of parents in the name of “education” or “protecting children’s health” then what area of our lives is safe from government intrusion?

Fortunately, growing dissatisfaction with government schools is leading many parents to try to change school policies.

“It is shameful that activists are weaponizing the US Department of Justice against parents,” Nicole Neily, president of Parents Defending Education told the Daily Caller News Foundation in response to the memorandum.

“This is a coordinated attempt to intimidate dissenting voices in the debates surrounding America’s underperforming K-12 education – and it will not succeed. We will not be silenced.”

This article (“A Politically-Motivated Abuse Of Power” – GOP Rep. Rages At AG Garland’s ‘Weaponization’ Of The DoJ Against Dissenting Parents) was originally published on Zero Hedge and is published under a Creative Commons license.