In February of 2020 we published an article about Dr. Francis Boyle, a law professor who drafted the Biological Weapons Anti-Terrorism Act in the United States. He was quite certain that SARS-CoV2 leaked out of a lab unintentionally, or intentionally, and that it was being used as a biological warfare weapon. He went on to state that many will profit off of this pandemic, both politically and financially, especially Big Pharma companies. He is still one of many experts in the field, which include a plethora of scientists, who have been voicing their concerns regarding the idea that COVID could have leaked out of a lab.

In the early stages of the pandemic any article written about Boyle was subjected to the wrath of Facebook “fact-checkers.” In fact, any article suggesting that COVID could have leaked out of a lab was deemed “fake news” and called a “conspiracy theory.” Despite presenting legitimate evidence, or simply sharing the opinions of experts in the field, media outlets like us were punished. As a result of these fake news strikes, we lost revenue, content reach and credibility. But as the world is seeing right now, we were not wrong to report these stories.

Here in June 2021, the lab leak theory gains more traction by the day. It’s no longer subjected to “false news” strikes by Facebook for simply discussing it. Yet neither Facebook, other Big Tech companies or mainstream media have done anything to apologize or compensate those who they wrongfully punished just one year ago. This is a great example of modern day censorship, it’s not about truth, but rather silencing information, evidence or opinion that calls into question an “official” narrative. It’s still happening on a massive scale today and one has to ask: how many other “conspiracy theories” or “fake news” claims are actually unwarranted? When will we know if we stick only to mainstream coverage?

Dr. Anthony Fauci was one of many figures publicly brushing off the lab leak theory as a conspiracy, but his emails from last year, obtained recently from a Freedom of Information Act Request, show that he was informed as early as January 2020 that COVID-19 exhibited viral characteristics which could have potentially been engineered in a lab.

In an email to Dr. Fauci sent on January 31 last year, Kristian G. Andersen, head of the Scripps Research Institute, told Fauci that some of SARS-CoV-2’s features “(potentially) look engineered.”

Here is the email in question between Anderson and Fauci. 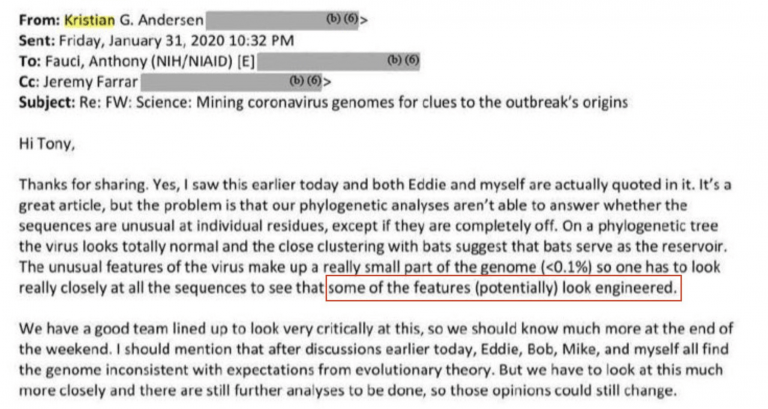 The line “Eddie, Bob, Mike and myself all find the genome inconsistent with expectations from evolutionary theory” essentially states that 100% of the people who looked at this data felt that COVID-19 did not evolve on its own, but was likely engineered. From the very get go, this was the initial thought of many highly trained scientists looking at this information – it was a credible hypothesis.

At the very least, these emails suggest that evidence of a lab leak of COVID-19 was existent even as far back as January 2020. This was never a conspiracy theory. Is it possible we are also seeing a massive global cover up around the origins of COVID-19? It’s possible, but one thing is clear, establishment politicians and corporate deeply failed at looking into this story, and punished alternative media who did.

“With the Fauci emails out, more are realizing just how unscientific this entire COVID process has been. In fact, you could argue it has been anti-science and based on an authoritarian world view. The MSM was of course complicit in doing no real journalism to figure this out.” – Joe Martino

Politifact recently retracted what they call a “pants on fire” fact check from September 2020 that labelled a Hong Kong virologist’s claim that COVID-19 was a lab-created virus a “debunked conspiracy theory.” This ‘fact check’ was placed on our article about her claims as well. We were handcuffed by Poltifact and told we had to change our article and headline to match their claims. We made our changes and added “This article has been updated and corrected” at the top to get our Facebook reach back.

So why did researchers all change their minds about the COVID lab leak theory? It’s tough to say. Kristian G. Anderson has distanced himself from the lab leak theory as much as possible. Him and his team eventually published an article in Nature Medicine which said they believed it was not plausible that COVID-19 was engineered and leaked from a laboratory. The paper also stated that it is not possible to prove or disprove theories of its origin.

Anderson’s paper was published in March 2020, about one month after the controversial Lancet publication that came out stating that COVID’s origins are natural, with its authors stating “We stand together to strongly condemn conspiracy theories suggesting that COVID-19 does not have a natural origin.” The Lancet letter was controversial because no conflict of interest was cited in the letter. Yet, lead author Dr. Peter Daszak, president of the EcoHealth Alliance of New York, runs an organization that funds coronavirus research at the Wuhan Institute of Virology. This means Dr. Daszak would at least be partly responsible for COVID leaking from that lab if it was made there and in fact had leaked. But this stark conflict of interest was never claimed in the Lancet letter. However, this letter became the authority that encouraged the world not to consider lab origins – at least not publicly. Perhaps this letter was why scientists like Anderson decided to ‘flip’ on their theory and distance themselves from the ‘lab leak’ theory.

An email from Dr. Peter Daszak, to Fauci on April 18, 2020, roughly six weeks after the outbreak sprung in the US states:

“As the Pl of the ROl grant publicly targeted by Fox News reporters at the Presidential press briefing last night, I just wanted to say a personal thank you on behalf of our staff and collaborators, for publicly standing up and stating that the scientific evidence supports a natural origin for COVID-19 from a bat-to-human spill over, not a lab release from the Wuhan Institute of Virology.

From my perspective, your comments are brave, and coming from your trusted voice, will help dispel the myths being spun around the virus’ origins. Once this pandemic’s over I look forward thanking you in person and let you know how important your comments are to us all.”

Fauci responded to the email saying:

Many thanks for your kind note.

The evidence is not yet clear for any form of global cover-up around COVID-19’s origins, but it would be foolish to dismiss the idea. What we do know is that many players were taking the lab origins theory seriously until it became publicly labelled as a ‘conspiracy theory.’ Perhaps they still took the theory seriously behind the scenes.

More recently, on May 14th, 2021, 18 researchers published a letter in Science arguing that the idea of SARS-CoV-2 leaking from a lab in China must be explored more deeply.

Fauci’s tone has also changed as of late. He came under intense scrutiny over the past month where he was questioned by US lawmakers, including Rand Raul, in multiple hearings. He stated that he wasn’t convinced (anymore) of the natural origin theory and that ‘I think we should continue to investigate what went on in China until we continue to find out to the best of our ability what happened.”

Why the sudden flip? Who knows? Perhaps they are playing catch up to a story that grew in the public eye too quickly, or perhaps there are political motives. Might this new inquiry be used to facilitate further tension between nations, mainly China, for ulterior motives? Is the debate really about actually finding out about the origins of COVID, or is something else going on here?

The interesting part as always is, humanity seems to have a difficult time exploring controversial subjects. Why can’t we come together honestly and openly and search for truth, together? The claims in many of Fauci’s emails call for a ‘togetherness’ in defeating COVID, yet actions say something else. Is it because truth, in today’s day and age, will expose other factors about our world, and perhaps this pandemic that will reveal what type of world we are truly living in?

This article (Fauci Emails: COVID “Looks Engineered,” A Govt-Funded Immunologist Told Fauci In January 2020) was originally published on Collective Evolution and is published under a Creative Commons license.